Ordination to the Diaconate/Death of my Mother

I'm in Bulgaria now, resting.  The last few weeks before I left for vacation took me through an amazing journey.  Before I finished my work for the year as a school psychologist, I was called to my mother's bedside, as it was thought that she might not live through the night.  Then each hour for the next two and a half weeks was thought to be probably her last.  I had to leave her side to go to the Cathedral in Salina to be ordained, thinking that I would not see her again.

The ordination was the most beautiful, spirit-filled experience -- beyond imagination.  I spent some quiet time in a small chapel before the service, numb with what might have been grief, had I been feeling it, but also full of adoration of my God, who has called me to be a deacon in his church.  Suddenly, light came flooding through a window over my shoulder, bathing the chapel in brilliant colors.  I looked up, and there was the Holy Archangel Michael standing over my shoulder, protecting me and all who pray in this place.  There are only three things I really remember from the ordination.  One was the laying on of hands.  I could feel the warmth of the Holy Spirit coming through the Bishop's hands into my head, and spreading throughout my whole body. 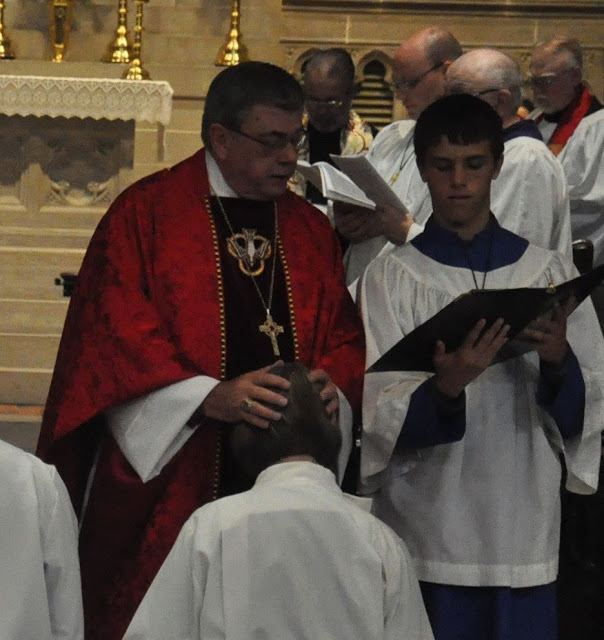 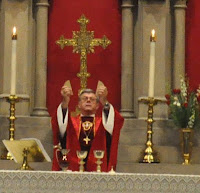 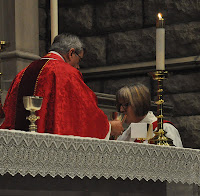 Another was receiving communion after the ordination.  It was a receiving into the Church and a blessing by the Church of what has been happening to me -- a recognition that this is where I belong, that I finally have come into God's will for me.  And above all, that I am in communion with Christ, my Lord and my King. 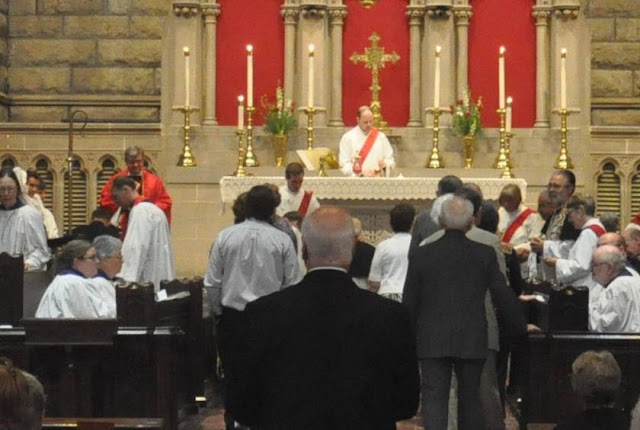 The last, and most vivid, thing I remember is administering the chalice to the people of my diocese.  It was as though I were an instrument in Christ's hands, indeed, a part of his body.  All the rest of the ordination is a blur.  Good thing people took lots of pictures!

Then when I went back to my mother's house, she was still alive, waiting to see me a deacon.  I modeled the black shirt and round collar for her.  She seemed pleased, but continued to live on, hour after hour and day after day.  She thought I was her mother, and wanted me to hold her hand all the time, day and night.  I had several nights of serious praying, asking God at first if he didn't want to speed this up a little, though of course, it was his will, not mine that I wanted.  I'm not telling you what to do, Father, just telling you how I feel, as if you didn't already know, but it feels good to tell it to you anyway. (You see, he puts up with a lot!)   Finally I got the message to stop whining and complaining and to line my will up with his, so that he could teach me some patience and compassion.  "Yes, Lord," is the only answer you can give when he talks to you like that, so sternly and so tenderly.  It makes you love him more, and love makes you want to do what he says.

The following night I felt her mother, my grandmother, holding my other hand.  I saw the transitional space between life and death, with my mother's two sisters and two brothers standing beside and behind their mother.  My father was there, but standing apart, watching over us all.  And beyond and above all of us stood Holy Michael, with his flaming sword, keeping us all safe during this time of vulnerability.  When the light of day came, I saw that my mother's face was grey and waxy, and that she had blood pooled in her legs, but still she was alive and alert to what was going on, though her eyes were closed and she did not have strength to speak.  She held to my hand, and held tighter when I started to let go. Finally, by afternoon, everyone else was out of the house, and somehow I knew to sing to her.  First I sang all the old songs my father used to sing to us, like Beautiful Dreamer, Red Wing, and Santa Lucia. Then I tried the Gospel songs her grandfather would have sung around the farm when mom was a girl.  Unfortunately, being an Episcopalian, I exhausted that repertoire pretty quickly!  Then I started WWII songs.  She smiled and looked more peaceful as I worked my way through everything I could remember of the Desert Song, then nearly all of South Pacific.  I did Sons of the Pioneers, including Cool, clear water, Don't fence me in, Drifting along with the tumbling tumbleweeds.  Doris Day:  I sang Moon River and Sentimental Journey.  Finally I tried to sing Deep Purple to sound like a big band. She "got it," smiled, and let go.  She always loved to dance to the Big Band music....
Posted by Adventures of Pioneer Woman at 3:39 AM