The Legend of Officer Quick

If you're looking for spirituality today, skip this one...  Look elsewhere.

There is a certain highway patrolman in Barber County who never sleeps.  Little did I know when I left Kiowa, heading northeast that I was headed for trouble.  I needed to go to Cairo for a home visit, and I barely had time to do it if I planned to make it to Cunningham in time for a meeting.  I am beginning to learn the roads among Medicine Lodge, Kiowa, Nashville, Sharon, Isabelle, Sawyer, Pratt, Attica, Hazleton, Cunningham, Anthony, and Kingman -- my new turf!  So I'm thinking, What am I doing?  I'm on the wrong road.  If I want to get to Cairo as quickly as possible, I'm going the wrong way.  I think maybe I should have gone north out of Kiowa and somehow got on the Isabelle road.  But I don't know how to get on the Isabelle road from here.  Where's that road that comes out on Hwy 54 at Cairo?  Don't know, but I'm pretty sure you can't get there on THIS road!  Rats!  Well, maybe I should go back.  No, I'm almost to Hazleton now; if I go all the way back to Kiowa I'd waste more time than I'd save.  Well, how can I get across?  Maybe Ridge Road.  No.  It's all beat up from the wind farm trucks.  I hate driving on that road.  Well, just go to Cunningham and across on 54.  Whatever.  Here's Hazleton.  I have to turn north here.  Hmm, flashing lights in my mirror!  I guess he's on an emergency call and wants me to get out of the way.  It's a pretty narrow road.  OH NO!!  He's pulling me over.  OK, fine.  Get out your driver's license.
"Good afternoon.  How are you doing?"
"Pretty good. Until now, that is."
(I can't find my registration.  Ok, get out the proof of insurance.  Ok.  I can't find that either.  Oh, boy, this is getting worse by the second.)
"Did you know how fast you were driving?"
"Well, no."
"I have you going 80 in a 65 on Highway 2 out of Kiowa."
"Oh."
"Could I see your registration?"
"Ummm.  Hold on.  I can't seem to find it."
"Looks as if your license tabs expired last March.".
"Oh," I intelligently responded. (Oh, right.  I'd forgotten about that.  I didn't have any  money in March, so I put it on the bottom of my pile of bills to pay later on when I had the money.  Now that I remember it, I think I should have done that.)
"Well, let's see the proof of insurance."
"I KNOW I have THAT.  I just can't seem to find it.  I must look pretty disorganized."
"Well, Ma'am, looks can be deceiving."
"Wait.  Here it is."
"That's from last year.  It expired in July.  While you are looking for it, I'll just go back to my car and process this."
(Where the ... is the ... insurance thingy?  Oh. Wait.  I know where it is.  It's in my dining room from when the deer smacked into my car and I had to phone up the insurance people....  He's back.)
"Did you know why you were driving so fast?"
"I was trying to figure out how to get to Cairo.  I think I'm on the wrong road.  I should have gone north out of Kiowa and tried to get on the Isabelle road."
"Probably."
(I'm thinking that it's really not a very good excuse to say I was driving fast because I didn't know where I was going, but since I had already said that, I might as well find out how to get there.)
"So how do I get across?  Ridge Road is too beat up."
"Yeah, it sure is.  I'd take K42."
"Oh, yeah, but how do you get on this end of the Cairo road?"
"Considering you don't know where you're going, you might be better off to just go up to Cunningham and get on 54."
"Yeah, you're probably right."
So I signed the tickets and headed north.  Yes, I said tickets.  It took two for him to write up all my violations.

It's a little nerve-jangling to get a ticket (or tickets) so I stopped at the co-op in Nashville for a cup of coffee.  For those of you readers not from the American Midwest, a co-op is a grain elevator and an office by the scale where the trucks weigh in and out before and after dumping the grain, and where guys hang out and drink coffee.  Pat Taylor, sort of retired from the Kingman County Sheriff's department, wrote about the Nashville co-op in his column in the Leader-Courier.  That's how I found out they have such good coffee.  So I filled up my cup.  Technically, it's free, but in actual practice if you fill up your cup there, you are expected to contribute to the entertainment.  So I told them I got a ticket.  First comment:
"Was it Quick?"
"Well, yeah, it was pretty fast."
"No.  I mean was it Officer Quick?"
"I dunno.  Who's Officer Quick?"
"He's the State Patrol."
"Oh.  Now that you mention it, I think it was a stater."
"Well, he never lets anybody off.  He's fair, but he never lets you off."
"So who all here has been caught by Officer Quick?"
(They all raise their hands.)
"He let me off once, though."
"How come?"
"I had a bleeding dog in my truck, going to the vet."
"Oh, well."  (Everybody agreed that any decent human being in rural Kansas would understand THAT.)

Next day I was in Medicine Lodge at the grade school, and the conversation took a turn toward the local  newspaper.  You have to know that in small-town newspapers they publish everything anybody does, including all that transpires at the County Courthouse, including notices of all arrests.  Including your age.  EVERYBODY reads these, with great glee.  So I said, "I guess you'll be seeing my name in the paper."
"Quick get you?"
"What?  How did you know?"
"He got me last winter.  I was on my way to a girls' basketball game.  My daughter was going to do the tip-off, and I promised her I'd be there to see it.  Two other people passed me while I was getting my ticket, and when I got there, everybody thanked me for keeping him busy so they could get to the game on time."
Turning to me, "So were you speeding?"
"I never looked at my speedometer, but it was a fair catch.  I told him I was driving faster because I didn't know where I was going.  I just hadn't put on the cruise control yet."
"Oh, well, you'd think THAT excuse should have worked!! Hahahaha!"
"Yeah, I'm surprised he didn't let you off with that one.   Hahaha."
"Well.  Fine.  Just go ahead and laugh at me." 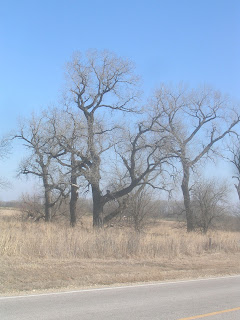 There's an old guy from Hardtner that got caught.  Must be in his eighties.  He called Quick a s..o.a.b.....  Then he said, "I'm not supposed to say that to you, am I?"
Quick said, "No, Sir, you're not."
"But I can THINK it, can't I?"
"I have nothing to say about what you think."
"Well, I'm thinking you're a s..-o.-a-b....."
Story has it that there was no response from Quick.  Everyone there thinks this is a funny story, and they are all proud that Quick is fair and unflappable.  Kind of makes you feel safe, somehow.

So, friends, mark this:  If you're ever driving in Barber County, set your cruise control.  Watch out for the man who never sleeps...the ubiquitous and implacable Officer Quick.

Please click on blue (number of) comments and add yours. Love to hear from you.
Posted by Adventures of Pioneer Woman at 3:32 PM