The Bright and Morning Star

Working all day, then studying all night and every weekend, certainly does cut into one's blogging time!  However yesterday was so beautiful in every way that I must make time to share.  Two days before yesterday I arrived home from my weekend in Topeka to find the official letter from my Bishop, saying, "...it is with joy that I tell you that you were admitted as a Candidate for Holy Orders in the Diocese of Western Kansas on October 1, 2012."  I had already been told that I had been approved by the Bishop, the Standing Committee, and the Commission on Ministry to become a Candidate, so it wasn't as if I didn't already know.  However, seeing it in writing on a sheet of good paper with the diocesan seal made all the difference in the world!  I was almost as elated as I was the day I understood that God truly was calling me to be a priest.  By today the elation has settled into a kind of quiet contentment that makes me the happiest I have ever been in my life.

Yesterday morning I had a meeting at 8:00 in Kiowa, which required me to leave the house by 6:30.  When I stepped outside, I beheld the sky absolutely ablaze with the stars.  There must have been something about the atmosphere that past night that caused clarity and magnification; others say they saw it, too, at different times throughout that night.  I drove away from Kingman's lights, into the countryside where the stars shone even more brilliantly.  Gradually the sky changed from black to indigo, and the stars began to fade.  There were no other cars on the highway--nothing to distract me from the glory that was set before my eyes.  As the stars faded, a tinge of orange lined the eastern horizon, and the indigo washed into gray-blue.  By now, nearly all the stars had disappeared, except for one:  the bright and morning star.  It seemed to grow brighter and brighter as the others receded from eyesight.  This photograph is the one I found online that is closest to what I saw: 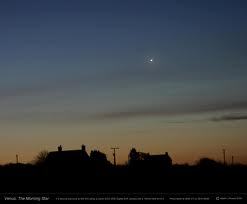 Isaiah 14:12 How you have fallen from heaven, O morning star, son of the dawn! You have been cast down to the earth, you who once laid low the nations!
2 Peter 1:19 And we have the word of the prophets made more certain, and you will do well to pay attention to it, as to a light shining in a dark place, until the day dawns and the morning star rises in your hearts.
Revelation 2:26-28   To everyone who conquers and continues to do my works to the end, I will give him authority and power over the nations; 27 And he shall rule them with a sceptre (rod) of iron, as when earthen pots are broken in pieces, and his power over them shall be like that which I Myself have received from My Father; 28 And I will give him the Morning Star.

Isaiah 60:1-3  Arise, shine; for your light has come! And the glory of the LORD is risen upon you. For behold, the darkness shall cover the earth, and deep darkness the people; but the LORD will arise over you, and His glory will be seen upon you. The Gentiles shall come to your light, and kings to the brightness of your rising.

Who could not go to work with a joyful and thankful heart after such a revelation?  Here's the funny part: When I walked into Kiowa High School and asked, "Where is the meeting?"  they looked at me as if I had two heads, and said, "Oh, well, the school counselor will know.  Let me talk to her."  In other words, there was no meeting there.  It turned out that I had my days mixed up.  The Kiowa meeting is Thursday morning, at 7:30 (yes, you got that right!  I have to go even earlier!  Sheesh!) and the meeting yesterday morning was in Cunningham, an hour away.  Who would have thought such beauty would arise from a silly mistake?  God be praised.
Posted by Adventures of Pioneer Woman at 9:53 AM