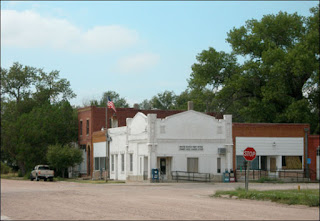 There are places where time is suspended.  Pawnee Rock is one of them.  After four days of driving to continuing education at Larned Hospital, listening to descriptions of violent and assaultive behaviors, learning how to assess them, examining statistical studies of discriminatory factors, treatments, and outcomes, it was time to for me take a different road home.  At first it looked like a mistake, since I spent the first half hour of my alternate route suffering through the road construction zone from hell, but after leaving that I came upon the town of Pawnee Rock.  I had been there with my family as a child, both in the town to buy gas and purchase a bottle of pop (orange or grape were the favorites at that time), and to the landmark to read all the plaques and to climb all over the rock.    The town looks just the same, except that they don't use all the buildings any more.  Many of them are standing empty.  But they have not been torn down or replaced by something else, so you can half-close your eyes and imagine it is 1952 and you are seven years old.  The weather had cooled off a little; it had stayed below 100 all afternoon.  A prairie breeze, fragrant with cedar and sunflower resins, stirred the cottonwood and elm leaves.  A lone mourning dove began its evening cry.  Not a person was in sight.  (The above photo is from the Pawnee Rock website's photo gallery.  The rest are mine.) 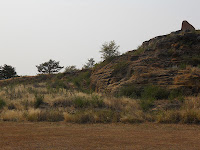 The rock itself is about a quarter of a mile north of town.  In its heyday it was a famous landmark on the Santa Fe Trail, marking the halfway point between Independence, Missouri, and Santa Fe, New Mexico.  Unfortunately it was shortened considerably by people quarrying the
red sandstone to build the Santa Fe Railroad and to construct buildings. I had read that the red building on the left in the (above) picture of the town is constructed of rock cut from Pawnee Rock, but I have since learned from resident, historian, and blogger Leon Unruh (see "Too Long in the Wind" on the Pawnee Rock website) that it is brick. 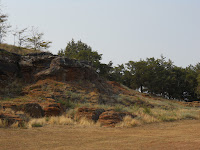 I do love to read every marker on every state monument.  The name Pawnee Rock is derived from either the fact that the Pawnee used to meet for council on top of the rock, or from the involvement of Kit Carson in a skirmish with the Pawnee.  The site was an excellent place for wagon trains to stop to replenish supplies and and rest the livestock.  Being near the Arkansas River, the area was replete with water, grass, and game.  It also was a favorite place for the Pawnee to attack the wagon trains.  Story has it that Kit Carson was so edgy one night that he shot his own mule, thinking it might be a Pawnee. 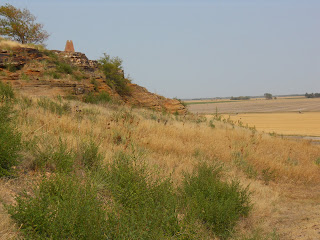 It is easy to imagine the infinite expanse of grasses with no trees except those marking the line of the Arkansas.  Wheat fields don't look that different from the rest of the prairie, this time of the year.  Where the highway is, you can visualize the ruts of the wagon wheels.  Sunflowers grew alongside the ruts, where the prairie grasses had been disturbed.  I was pretty sure that if I looked in the eroded areas, I would find some arrowheads.  I didn't see any, but I enjoyed looking.  In that little vacation from time I was seven years old, stopping to rest with the wagon train, eagerly scrambling down the wheel to run and play in the grasses, and to climb the rock.


Posted by Adventures of Pioneer Woman at 7:35 PM